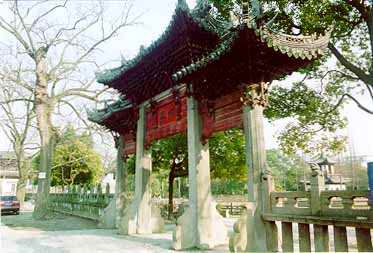 The Remains of Ancient Song Ze Culture is located in Song Ze Village that is 5km to the east of Qingpu City. It is so far the earliest remains of culture in Shanghai and has a history of five to six thousand years. The upper layer of the remains is sandy brown and the unearthed cultural relics are earthenware, porcelain, stoneware and few bronze ware from the late West Zhou period and the Spring and Autumn period, and most porcelains show that the people at that time have achieved high standard of workmanship; the middle layer is grayish brown and the public tomb of a primitive commune; the bottom layer is bluish grey, containing cellars for food storage and primitive production tools.

Painted Pottery Stem-bowl: caliber 17.4cm, 11cm high, unearthed from the Remains of Ancient Song Ze Culture, food container. The upper part is like a plate, the exterior of which is bulged and the interior has certain arc to increase the capacity of the plate; the mouth rim and bottom of the plate exterior is drawn inward to form two circular edges that present strong sense of third dimension. The lower part is a horn like circular stand that is rather thick and short. The bottom and the upper part of the circular stand is carved with bulging lines to enhance the stability of the container. The plate wall bears reddish brown and light yellow painted arc shapes and the circular stand has reddish brown wide band painting. The whole stem-bowl presents rich color and a sense of elegance and grace, rating it top in the pottery stem-bowls.

Pot-like Red Pottery Tripod: 32.6cm high, caliber 17.7cm, unearthed from the Remains of Ancient Song Ze Culture, cooking apparatus. It is reddish brown pottery mixed with sand. The upper part is the cover and the handle on the cover is shaped in three parts, which is very rare. The mouth rim turns outward, the neck is a dented arc, the shoulder is a little bit slanting and several circles of raised lines are carved. The belly bottom part is smooth and arc, showing traces of roast smoking. The lower part is three flat triangle feet, the bottom of which turns outward and both sides have animal eyed slots and finger pressed tooth lines are carved on the feet back. The tripod is simple and elegant and represents the prototype of bronze ware of the Shang and Zhou times.