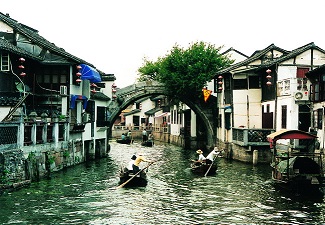 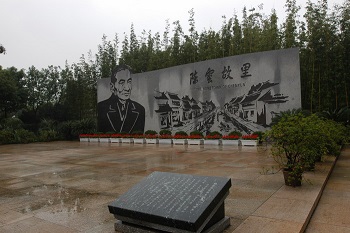 Depart from the downtown of Shanghai at 8:00 a.m. and visit Chen Yun Memorial in Qingpu District: This is a two-storey half-timbered house situated at the Chaozhen Bridge on Xiatang Street. Have lunch in Zhujiajiao Ancient Town and tour in this ancient town to feel authentic natural landscape. And go back to the downtown of Shanghai.

Chen Yun Memorial is the only memorial in China established under the approval of the Central Government for systematically displaying the life and achievements of Chen Yun. It completed construction and opened to the public on June 6, 2000. Comrade Jiang Zemin wrote the name for the memorial.

Chen Yun Memorial is located in Chen Yun’s hometown: Liantang Town of Qingpu District, Shanghai. The memorial neighbors to Shi River in the north and Xitanggang River in the south and covers an area of 52 mu. Its architectural design shows distinctive features of areas southern to the Yangtze River and keeps in harmony with houses in surrounding area. The 14 meter’s high main building is a three-storey building (two floors on the ground and one floor underground) with a total floorage of 5,500 square meters. The architectural design for the memorial looks simple and solemn, not only showing the style of residence in areas southern to the Yangtze River, but also revealing the feature of large exhibition area in a modern memorial. Historical materials that showed the brilliant life of Chen Yun, including photos, documents and real objects, are exhibited on the four exhibition halls on the first floor and the second floor based on the sequence of time. The exhibits on the underground floor showed the glorious history of Qingpu people for carrying out socialist revolution and construction under the leadership of the Communist Party of China. Diversified means of exhibition were used in the memorial, trying to realize unity of contents and forms. In 2001, Chen Yun Memorial became a Demonstration Base of Patriotism Education of China approved by the Publicity Department of the Central Committee of the CPC.

Zhujiajiao is an ancient town with long history. It has become a market city in Song and Yuan Dynasties, and the town was formally established during Wanli Reign in the Ming Dynasty, and its name was Zhujiege or Zhuxi. Thanks to favorable natural environment and convenient waterway transportation, Zhujiajiao Town became a town famous for the textile industry. Business was thriving here. Zhujiajiao Ancient Town is favored by tourists at home and abroad for its precious architecture of Ming and Qing Dynasties. There are 36 elegant ancient bridges, 9 ancient streets and several ancient residences of Ming and Qing Dynasties by the river. The Fangsheng Bridge on Caogang River, a five-arch stone bridge of Ming Dynasty, looks particularly elegant and magnificent. As a Historical and Cultural Site Protected on the Municipal Level, Fangsheng Bridge is one of the oldest stone arch bridges in Shanghai. Kezhi Garden, a garden built by the Ma family, is situated at the northwest area of the town. The pavilions, terraces and buildings in the garden are well-arranged and have diversified styles. Buildings in the garden include the Wangyue Pavilion, Wujiao Pavilion, Xiaoyao Pavilion, the banquet hall, the ancient stage, the book city and the painting and calligraphy gallery. Tourists could also visit the City God Temple and Zhuxi Garden in the ancient town. In 1991, Zhujiajiao Ancient Town was named as one of the four Historical and Cultural Towns in the city. In 2001, it became an appointed scenic spot for heads of states on APEC. In April 2006, it became one of the 50 most favorite scenic spots for foreigners and won a gold award.