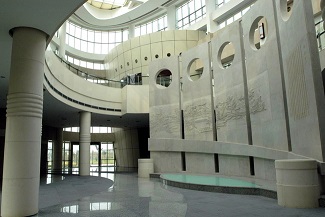 The history of Shanghai originated from the western region of the city. Qingpu Museum, situated at the Songze Plaza in Qingpu District, covers an area of 8,800 square meters. The museum is designed by Xing Tonghe, a famous architect of China. The main building of the museum consists of five intersecting ellipses, like a butterfly spreading its wings to fly, which symbolizes the landscape of Qingpu District. There are five areas in the main building; the central part is the main hall; the east wing and the south wing is the exhibition area; the west wing and the north wing is the area for office, reception and temporary exhibition. The new building takes audiovisual and electrical means and combines exhibition of relics with reconstruction of scenes, exquisite documents and photos and multimedia means of exhibition. By introducing ancient historical sites, e.g. sites of the Songze Culture and the Fuquanshan Site to visitors, the museum tries to help visitors know that Qingpu is the birthplace of ancient civilization of Shanghai.